This one comes with a health warning. Or at least it should. This rich, creamy, chocolatey treat is my idea of heaven but even I can’t eat too much of it. That slice in the picture is far too much for one person to eat. I would recommend only making this Chocolate Truffle Cake when you have a crowd to cater for.

I first tasted a Chocolate Truffle Cake in The Tannery some years ago and this is my attempt to recreate that. This dessert is impressive but it’s actually really simple to make, well at least my version is anyway. I’ve baked a simple thin sponge for the cake but really the truffle is the star of the show here. The cake is just something to hold it together. You could go for a base of crushed biscuits like this Chocolate Silk Pie or I really like the look of Nigella’s Chocolate Meringue Truffle Cake  from Feast.

One thought on “Chocolate Truffle Cake”

This site uses Akismet to reduce spam. Learn how your comment data is processed. 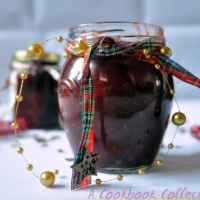 © Donna Hennessy and ACookbookCollection.com 2013-2021. Unauthorized use and/or duplication of this material without express and written permission from this site’s author and/or owner is strictly prohibited. Please contact me ACookbookCollection@gmail.com if you wish to use any of the content of this blog.